Taking a look at what kinds of designs I’ve done in my bullet journal for August.

Each month, I’ll be blogging about my bullet journal (bujo) spreads and designs. If you don’t know what a bullet journal is then you can read about my interpretation of the practice, or take a look at the basic format.

My August design scheme is a little funny because I actually had to do it all in two parts, and for some reason I chose not to stick with a theme. Part of the month has been designed in a basic style with bits of colour; the other part was done with simple lines — albeit using metallic sharpies. 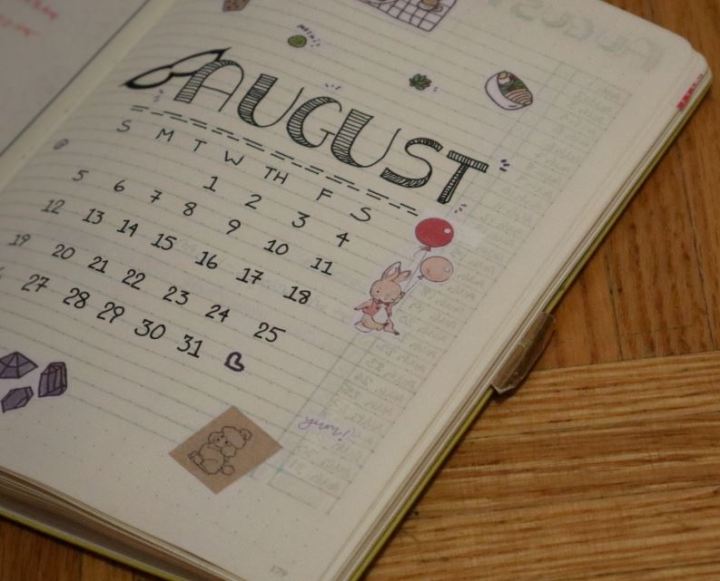 This is actually one of my favourite cover pages — I’d say in my top two. I decided to go with simple designs for the written part, and then add some fun stickers by Paperkumaco. The only thing that is not a sticker by Paperkumaco is a piece of paper that actually came in an order from a site that sells Cooking with Dog merchandise. My husband Jon and I are big fans of the show Cooking with Dog and we were so sad to hear that Francis the poodle (who “hosts” the show) had passed away a while back. It’s still something he and I watch together, so I wanted to incorporate this little picture of him into my bullet journal — and decided to throw it on the August cover page with some regular tape.

I decided to make the “August at a glance page” in a similar fashion and use the same kind of lettering scheme I had for the front page. (Pinterest is an adventure, people — that’s actually where I found this kind of writing style.) I didn’t want a full calendar, but I didn’t want a haphazard looking list, so I tried to draw out lines for each day. I actually like this style of monthly layout better, and will probably use it for September, too.

The first two weeks of August are definitely plain-looking, save for the stickers and the pops of colour. That colour is all highlighter, and makes me want to invest in those brush pens for something less severe (which I think I will do for my next bullet journal). The rest of the weeks include an array of boxes and lines to separate the days. I’m going to give the smaller boxes a try one more time, but I think that if it doesn’t work out after this month, I’m going to try to stop drawing them. 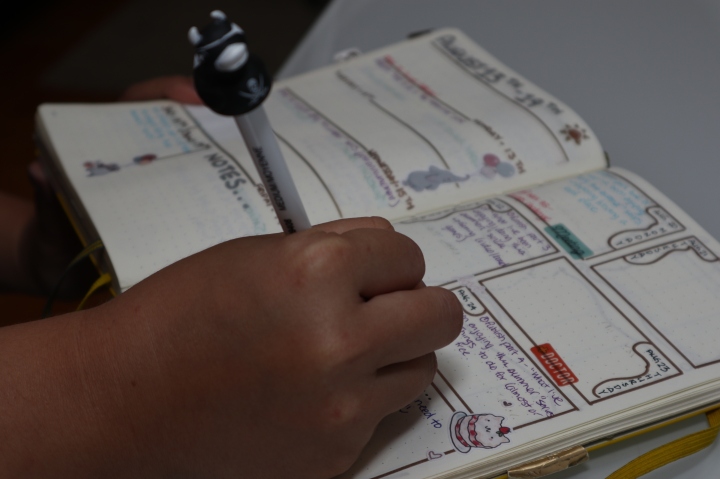 I also included more expense sections just because we’ve had to spend so much the last few weeks — so to properly track that there are two more than usual (when comparing to other months, on average). I generally only have two.

Looking forward to seeing what everyone else is doing for their August layouts! Make sure to let me know in the comments section if you have any good ideas for September!