The whole point is to customize your experience so it works for you.

It’s interesting to see the kind of discussions I’ve recently engaged in since I’ve started blogging and Instagramming my bullet journal adventures, and one of the things people tend to tell me after I’ve posted something new is that they’d like to try analog planning but they can’t get into it because there’s this perception that you have to subscribe to “the way it’s done” to “do it right.”

Well, let me be the first to tell you: you don’t have to follow anyone’s way to get it all done! I have changed the way I bullet journal so many times — it’s really neat to actually look back on!

I’ve heard the argument over and over that bullet journaling was a method that’s long existed. It’s considered a kind of agenda (as of publication, if you try to search “bullet journal” on Wikipedia, you get redirected to “personal organizer”). However, the prominence is a bit of a different story: some people focused on the aesthetics, while others simply wanted to get organized in a space separate from their smart phones. As it stands, I find more mainstream bullet journaling to be about the aesthetics than completing your bullets.

Because I fall somewhere in between, I’ve made the system work for me. I know what I tend to refer to: unless it’s one of the three calendars up on my wall, I’m not really into monthly spreads. I’ve completely axed the year-at-a-glance portion and swapped in a birthday section because the things I need to find time for generally come up within a minimum of three or four weeks in advance, not a year ahead. 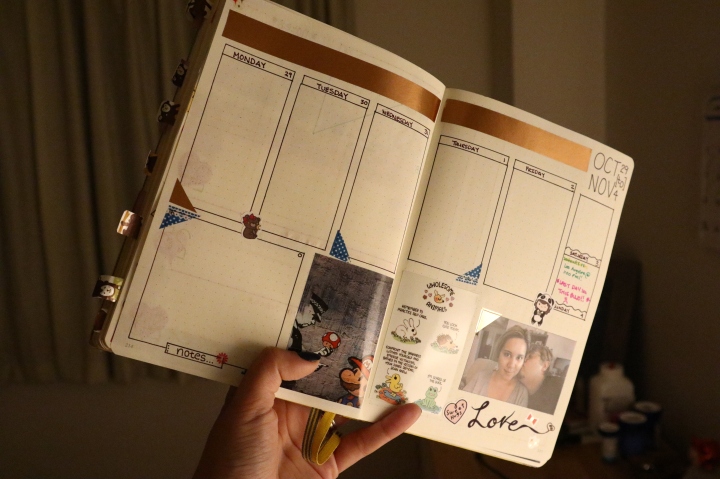 Whether it’s Ryder Carroll’s method, something fancy and artistic, or a mix of both, planning isn’t something that needs to be done in a certain way. Sure, there are some fundamentals (like actually referring to your planner as much as possible to help you get your shit together — after all, that’s why the majority of us have a planner), but no rules need apply if you’re designing your own agenda! A few bullet points here, a couple of headers there…it’s all up to you. 🙂